On September 17, 1983, Vanessa Williams became the first Black woman to win the title of Miss America. African Americans across the country and the world was excited to see a smart black collegiate from Syracuse University win the title as the first Black woman to be Miss America. Beauty, talent and intelligence were well represented the evening of September 17, 1983 as Vanessa Williams took that long walk down the runway. Although she represented and wore the title of Miss America well publicly, privately Vanessa and her family had many challenges and controversies. For the first time in pageant history, a reigning Miss America was the target of death threats and hate mail.

In addition to the racial epitaphs Vanessa received daily, 10 months as Miss America, Williams was publicly humiliated and disgraced over the unauthorized use of nude photographs bought and published by Penthouse Magazine and publisher Bob Guccione. New York photographer Tom Chiapel had taken silhouettes of Vanessa and another model prior to Williams becoming Miss America and supposedly destroyed the pictures. 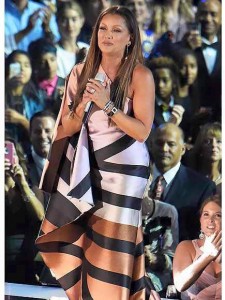 Feeling pressured from the media and Miss America Pageant officials, on July 23, 1984 Vanessa Williams officially stepped down as Miss America but kept the bejeweled crown and scholarship money she won as part of her award package.

Throughout one of the most horrific times in her life, whereby, the media and the public all had something to say about the scandal, Williams held her head high. She moved on with her life with grace and dignity and focused on her career in music. Vanessa beat the odds and surpassed everyone’s imagination with a wonderful career in entertainment; far surpassing any other Miss America. It took 32 years (three decades) for the Miss America Pageant to apologize to both Vanessa and her mother Helen Williams at the Miss America 2016 pageant for the way the scandal was handled.

CEO Sam Haskell told Vanessa. “You have lived your life in grace and dignity, and never was it more evident than during the events of 1984 when you resigned. Though none of us currently in the organization were involved then, on behalf of today’s organization, I want to apologize to you and to your mother, Miss Helen Williams,” Haskell said as Williams’ eyes filled with tears. “I want to apologize for anything that was said or done that made you feel any less than the Miss America you are and the Miss America you always will be.

Lesson learned- despite the circumstances and regardless to the situation we as black women must hold our head! The battle is not ours to fight. We must learn from the action(s), move beyond the negative be poised at all times and forgive.

Thank you Vanessa Williams for being ‪#‎POISED‬ through it all. ‪You will forever be our Miss America 1984.