Written by Katy Young, The article initially appeared on The Telegraph

Beauty and wellness “are not about age.” Particularly so when you look as good as the 60 year old Somali-American fashion model, who scored her first Vogue assignment at 22 in the 70s, shot to fame in the 80’s, and was appropriately described by Yves Saint Laurent as “the dream woman.” 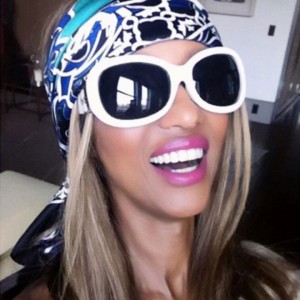 No matter how hard we try to take on said ageless beauty philosophy, we can’t help but ask ourselves – any chance we could look as good as Iman on turning 60? A lifetime of exercise, strict diets and confidence perhaps?

Far from it says Iman, who shared her secrets to achieving that timeless beauty.

“Life is too short not to have pasta, steak, and butter” Hallelujah we say, “I like moderation,” says Iman. She also likes the idea of having vegetables “a few times a week. I don’t love eating meat. I really only like chicken and fish.” Iman, who only started cooking when she began dating her husband David Bowie (because as a model “we got up at 10 or 11pm and then went out, eating at 4 or 6am, before going to bed,”) now loves her time in the kitchen so much, it also doubles up as therapy.

“Your self-esteem is the hard part” Unless Cindy Crawford is booked for the same job as you, (”That will bring you down in a second,” she admits), Iman says looking good has a lot to do with how you feel. “People say that modelling is hard. It isn’t really, when you compare it to other jobs. I mean, you get the job and when you arrive, there is a make-up artist, manicurist, and hairdresser and you’re working from nine to five….. Your self-esteem is the hard part. I can wake up and be like, ‘I look good, I got this.’” Iman, who suffered terribly with confidence issues until reaching the age of 50, whereupon she found ‘quietness inside,’ adds, “find something to like about yourself and hold on to it.”

Diet should be out of your equation“Eliminating the things you love is not wellness. Wellness feeds your soul and makes you feel good.”

“Cardio is the most important thing” Iman didn’t start exercising until her late thirties towards the end of her modelling career, because “one day you look up and you are on the floor,” she admits. So after trying, and failing, at step-aerobics, she tried boxing and “loved it. It makes you stay in the moment that is in front of you.” For the while, still suffering from a 2014 foot fracture, she sticks to Pilates three to four times a week, “It is very challenging, but I still find it boring. As I age, cardio is the most important thing. Feeling out of breath is the thing that I miss most.” 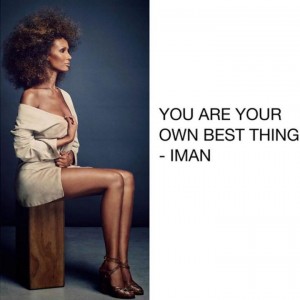 “I’ve been forced to sit still” It’s when you’re still that “you really see,” she says. “I tell all my younger friends ‘don’t be afraid of change. That is when you truly see what your destiny is.’” So slow down, sit quiet and “let it be and reveal itself.” Don’t rush change though, “I’m 60, not 70….’B**ch don’t rush me’ – maybe that should be on my cake,” she adds.