Can you tell when your anger gets out of control? 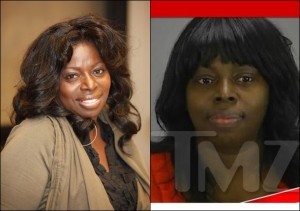 According to a DeKalb County police incident report, R&B Divas: Atlanta star and singer #angie stone said her daughter Diamond Stone hit her in the face with closed fists first. But Diamond Stone and Blondy Chisolm, a family friend who witnessed the Monday night altercation, told police they were not sure who threw the first blow.

Angie has been arrested and charged with domestic violence. But all of this didn’t stop Diamond from continuing to comment about the situation. In a post on her Facebook page, Diamond is speaking out regarding the incident as she vows to make her version of what happened known.

“People are so quick to pass judgment but never really know the full story,” Diamond wrote. “Never uphold people in wrong no matter who they are I’m crushed but I ain’t dead so for the people that praise “her” keep right on just know that it ain’t over. You so big and bad but had to use a weapon on me in a fight that you started. You giggled on the inside because you thought I was going to jail too.?#?Wrong? I’m sick of putting up these fronts and because you took sh*t to another level I will too. I love all my family but I cannot take anymore abuse so I’m separating myself from it all. I pray God heals us from this but from where I sit there is no turning back cause if you ain’t wit me you against me. You so worried about the media and the press but I promise you this I will not rest until my story is heard!”

In addition to her message, Diamond posted photos of the teeth that fell out of her mouth from the assault as well as the metal plank Angie Stone used to striker her.

Do you let your anger build up to where you just can’t take it anymore? Diamond makes mention that this is a situation that has happened before. It doesn’t matter if it’s your mother, daughter, father, family member, or lover…untamed anger can be bad for everyone involved. Especially for those who experts categorize as having a “low tolerance for frustration”.

Here’s a few pointers on how to control your anger, before it controls you:

• Breathe deeply, from your diaphragm; breathing from your chest won’t relax you. Picture your breath coming up from your “gut.”
• Slowly repeat a calm word or phrase such as “relax,” “take it easy.” Repeat it to yourself while breathing deeply.
• Use imagery; visualize a relaxing experience, from either your memory or your imagination.
• Non-strenuous, slow yoga-like exercises can relax your muscles and make you feel much calmer.
• Get naked. No seriously. It’s been tested that when people are angry an unorthodox method to channel that anger is to completely undress. It either changes the person feelings from anger and contempt to lighter feelings such as laughter, happiness and arousal.

Sometimes, our anger and frustration are caused by very real and inescapable problems in our lives. Not all anger is misplaced, and often it’s a healthy, natural response to these difficulties. There is also a cultural belief that every problem has a solution, and it adds to our frustration to find out that this isn’t always the case. The best attitude to bring to such a situation, then, is not to focus on finding the solution, but rather on how you handle and face the problem. Make a plan, and check your progress along the way. Resolve to give it your best, but also not to punish yourself if an answer doesn’t come right away. If you can approach it with your best intentions and efforts and make a serious attempt to face it head-on, you will be less likely to lose patience and fall into all-or-nothing thinking, even if the problem does not get solved right away.

Practice these techniques daily. Learn to use them automatically when you’re in a tense situation