What I Felt at The Woman’s Rights March on Washington 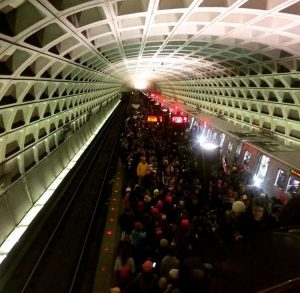 Yesterday was surreal. My work week was a banger and by Friday I was tapped out, but I wanted to be in DC and when my sista friend Claire called and said she was riding down with an extra seat for me, I hitched a ride. We left NYC around 3:30 AM and surprisingly, we made record time.  When we arrived in Washington D.C., we decided to park the car and take the green line into the march. This was my first encounter to the day ahead. On our train, there was a consortium of eager pink pussy wearing hats, women, and men. It was a mixed bag of apples with both conservative and liberals, gays and straights, organizations and indies who were shouting out where they were from, coming all the way from Albuquerque to Seattle to Washington to NY to Connecticut. I thought, “the people came out.” The energy was good. Leaving the station, I looked down standing on the train escalator and was overwhelmed by the scene. There was a massive crowd downstairs, waiting patiently to exit at 9 AM.

When we arrived and headed toward Independence Avenue, I was thrilled to see so many people were in attendance. The energy was electrifying. It felt a little Woodstockish, but calmer. Watching Gloria Steinem speak I received chills when she said there were over 1000 more buses needed for the Million Woman March in DC than for the Inauguration Day, and that women were marching in 6 continents besides our own country.  I was so ecstatic to be soaking taking in the moment. During the day, a few of my favorites chants were “Hey hey, ho ho, Donald Trump has got to go” and “Hands too small, can’t build a wall.” Another highlight of my day were the signs that people made, because it really gave me a chance to read people’s hearts. I remember thinking how important it must have been to them because they actually took time out of their day to create these thoughtful and colorful pieces of art. They wanted to make sure their voices were heard and felt (or read).  Some that stood out were “I’m with her + her + her _ her”, “If I wanted the government in my womb, then I would fu$% a senator”, “Black Lives Matter,” “Free Melania,” “Wutang women and nothing to fu$% with” and “Cheetos is for eating, not for tweeting.”  These loud messages ranged from health care to black lives matter, to marijuana cures, to indivisible not division, to love trumps hate. There were so many good ones to name but the messages were loud and clear. Whether it was addressing sexism, racism, or anything else that the Trump regime represents, the sentiment conveyed was “I am fed up. I am here. I am with like minds, and I am ready for a change.”

The magic of the Women’s Rights March was exhilarating. As a woman, it reminded me of our beauty, inner strength, character, resilience and flavor despite our differences, adversities, or challenges. We represent the underrepresented. We are the givers of life and born with a nurturing gene. We’re poised women that come in varied shapes, colors and sizes.  On a larger scale, the marches were a catalyst for a narrative worldwide. With so many different backgrounds, denominations, cultures, immigrants and different walks of life to share one common cry…a need for CHANGE, and a change needed now. There was no room for divisiveness. The focus was on unity and respecting differences, for the greater good of the common agenda, it was nostalgic of what this country’s fabric always represented…a diverse group of individuals with independence with interdependence.

Yesterday was like drinking a bottle of hope. Hope is the biggest agent for change because it gives us a glimpse of what the future can be like if we put in the work. I think Americans are awake now, and the world is standing with us. Besides the proactive spirit and good energy in the air, yesterday was the fuel that ignited many spirits, lit a fire and prepared us that reality check that it’s time to roll up your sleeves and put in the work. Be prepared to fight for your future, for your children’s future, and in order to survive and thrive moving forward. It’s about self-preservation as well as globalization because we are all connected. The marches worldwide and confirmed that anything is possible when our hearts are in the right place and we take action.  It shows us that love trumps hate every time. It’s overwhelming to think that over three million people marched and took action because someone actually thought and imagined it first? Kudos to the dreamers, organizers, and doers. Let’s challenge ourselves to continue to build from that energy and commit to organizing in our communities to become a part of a long-lasting narrative of CHANGE. #poisedwoman #walkergems

April Walker is a trailblazer of Urban Fashion, one of the innovators and pioneers of the “Urban/Streetwear” fashion movement that catapulted into a multi-billion dollar industry and CEO of Walker Wear.  She is also a leader and catalyst in fashion cultivating ties with influencers, communities, organizations, and brands. April is currently writing a book “Walker Gems”  – A Daily Devotional of Life Lessons Learned on the Road to Success (due March 1, 2017). Follow April Walker on Twitter @theaprilwalker