Songstress Faith Evans celebrates 20 years as a solo artist with a mission to own her career and life as never before.

This is undoubtedly a good time to be Faith Evans. She recently released her 8th studio album, Incomparable (Prolific Music Group), which features collaborations with Missy Elliott, Jazmine Sullivan, Keke Wyatt, B. Slade and Karen Clark-Sheard. The Incomparable Tour is in pre-production. She performed on the BET Awards for the Bad Boy Records 20th Anniversary Reunion. Faith, with friend and business partner Nicci Gilbert, is in the process of launching another reality TV program that is a joint effort with Queen Latifah. It is safe to say Chyna, Christopher, Ryder and Joshua’s mom is healthier, fitter and more confident than ever. 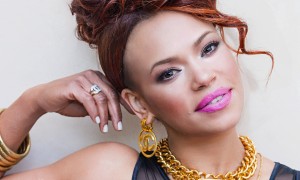 This year is also the 20th anniversary (August 29, 1995) of her debut, platinum-selling LP Faith. Music critic and entertainment writer Rashod Ollison says of Faith, “It was a great introduction of Faith’s style and an assured first effort.” Though it was her first album, she had paid her production and writing dues on projects for other Bad Boy artists like Total and Mary J. Blige on My Life before its release.

All is well for the woman who has endured any number of trials common and uncommon to many of us. All is well for the woman who would climb out of the window as a teen to chase the music instead of boys, and who humbly began her days at Bad Boy Records writing and singing on tracks. Producer and friend Chucky Thompson recalls her as a grinder who “would handle her business and bounce.” All is incredibly well for the first female artist signed to Bad Boy and who recorded three platinum records while on their roster (Faith, Keep the Faith, Faithfully).

Recently, Faith Evans spoke with Poised about the business of being Faith Evans. On the day of the interview, she was in mom mode chauffeuring her son to and from a doctor’s appointment. And as you will read, she is indeed like you and me in that she just rises to the occasion to make the most of her time, talent and resources.

Poised: Do you find that you have more time now to be creative and productive with your business endeavors now that your children are older?

FE: My youngest son is on the autism spectrum, he requires more attention. Thankfully he is on the very low end of the spectrum. Being a single mom is not easy at all; I make it my business to carry out these ideas. I’m always developing and executing ideas. I make concessions to make everything work out. It is a constant balancing act. I have more desire to see those things through now that I’m on my own.

Poised: Which disciplines have proven to be the most helpful in managing home, a business and a personal life?

FE: I am a list maker. I keep lists everywhere. There are lists on my phone, because I’ve become acclimated to using apps to stay focused and organized. I’m also very hands on with my career. It’s just easier than delegating, so there isn’t a team running things for me. I’m just replicating what I saw my mother do as a parent to manage home, work and me. She was my role model, so I think my need to stay grounded is because of the way she raised me, and I’ve tried to do the same with my children.

Poised: You are known for your resilience in an industry that is youth-oriented and fickle. The way the resilience played out is in ownership. When did you decide to become not just an artist but an owner of Faith Evans the business?

FE: As far back as I can remember I was fascinated with the credits on projects like movies, TV programs, and on albums. Reading credits put something in me to see my name in different slots other than artist. There were other roles I could play on projects that could be as lucrative if not more. Some of my best lessons were learned at Bad Boy. I watched everything, asked question, and tried to do many things until I realized that I could do those things for myself. For example, I make and own my masters.

As a child I was attracted to the idea of making money. I always had this thing in me that I wanted to be able to help the household. My grandmother and grandfather raised me and raised foster kids so some kind of way they always managed to take care of us all. We had a neighbor who worked at Newark airport who would let me sing and I’d come home with money as a kid. I thought, ‘I can make some money singing.’ Publishing is more lucrative and more of a source of income over time. So, I was making money writing songs before I got a record deal. Becoming a recording artist was not in my plans at that time.

I always wanted to branch into TV. However, I just didn’t realize the worth of my brand and pursue people taking meetings with me to make things happen. [Faith credits friend and business partner and the creator of the R&B Divas franchise Nicci Gilbert as someone to push her out of her comfort zone to pursue co-executive producing.]

FE: I have a great gift to offer as far as music is concerned. I have the same passion for creating music now as I did at the beginning. The gift to write music, sing music, produce and arrange music is bigger than I am. I work for me and to be fulfilled as a woman. My family receives the overflow.

Poised: Do you have mentors?

FE: My mother and grandmother were my first mentors. They are polar opposites: mom is no-nonsense and my grandmother didn’t want to offend anyone. I am a combination of the two of them, the best of them. The person I am is due to them and what I learned from them. They raised me to be a good person and to remain humble.

Poised: What advice do you have for women who are entrepreneurs and run their own businesses?

FE: Take care of yourself. In the beginning of my career I had access to some of the best trainers and nutritionists but I didn’t focus on health and fitness. To maintain endurance and maintain my sanity now that I’m older, I now focus on making that time to exercise. The only time I have to myself is from four in the morning to 5:30 a.m. I use that time to pray, meditate and listen to music, and basically, hear my own thoughts. I use that time to process the day ahead.

Visit Faith’s site FaithEvansMusic.com to sign up for updates and news, purchase music, and follow her tour schedule