By Michael A. Gonzales

These days, my mom Frances Gonzales seems to be shrinking. Visiting her recently at her Baltimore apartment complex, I stood in the doorway of her bedroom and was struck by how much shorter she was than when I was a kid. Maybe, back in the day, it was the heels she wore or simply the fashion model trained way she always walked so straight; even when burdened with the bags full of books and magazines she carried from her midtown office to our uptown apartment, the lessons she learnt as a teenager attending Grace Del Marco Modeling School in Harlem stayed with her. Unfortunately, mom didn’t pass on her book-on-the-head walk to me, but it was one of the few things I didn’t inherit from her.

A wonderful storyteller in her own right, when I was a kid mom would tell me cool tales (usually there was music in background: Frank Sinatra, Henry Mancini, Burt Bacharach) about the things she did while pregnant which included attending a Picasso exhibit, binge watching horror movies, reading Henry Miller and whatever else she could get her hands on. “After you were born, I’d put books and magazines in your playpen,” she’d say, “and you would be looking at them like you were really reading them.” Years later, I’d raid her shopping bags for magazines, having developed a lifelong passion for glossy periodicals with smart writing and sharp designs.

My two-year younger brother Carlos and I were New York City kids growing up in Harlem, but mom was always dragging us to various parts of town, exposing us to both the glam and grit of a city that would become one of my best friends. Recently a film producer expressed a fondness for the way I “make the city into a character” in my fiction and articles, another passion that can be attributed to mom dukes, who hates when I call her that.

Thinking back to those childhood days of riding down Fifth Avenue on the #5 bus as mom pointed out the Guggenheim Museum and then told me about the architect Frank Lloyd Wright who designed the glorious building; I can recall her taking us to lunch at Tavern On The Green and taking the opportunity to teach us about napkins in the lap and what fork to use for salads; it was also my mom who got me hooked on movies, taking me Radio City Music Hall when I was three to see The Sound of Music. To this day, no straight man loves a good musical as much as I do.

By the time I was eight, I already knew I wanted to be a writer and mom supported my decision, encouraging me submit stories to magazines before I was even a teenager, helping me create a Xeroxed school paper when I was in 7th grade (an angry nun shut down the whole operation) and pushing me, after we moved to Baltimore when I was fifteen, to apply for an internship at the City Paper, the town’s alternative weekly. To my surprise, the editor-in-chief took me on to help with the paste-ups, my first real job in publishing.

I know it sounds kind of corny, but I’ve always considered my mom one of my best friends and her own best friends, beautiful talented, professional women (Aunty Ricky, Aunt Bootsy, Aunt Carol, Jackie the Hairdresser and Jill, my first older woman crush when I was eight) were all my aunts and godmothers and were part of the village that nurtured me from birth to boyhood to the cranky middle-aged man I am today.

Sometimes mom would have cocktail parties and her friends would all be there clad in their stylish clothes sipping highballs like characters from a John O’Hara novel as they chatted, smoked cigarettes and nibbled on h’ordours. To this day, most of my close friends are women who are as witty, smart and beautiful as the examples I was raised around. To this day, mom is still friends with them all while also becoming friends with many my friends as well. 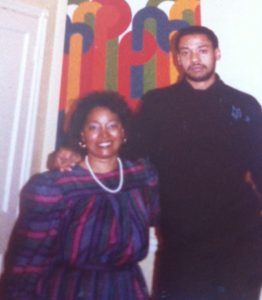 God willing, mom will be eighty years old this year and I know that is a blessing. Still, although she is no longer as tall as she once was, she’ll always be a giant to me.