When she was 50, Boston entrepreneur and fashion stylist Ophelia Bakon was lauded by Essence Magazine as an age-defying wonder. That was nearly 18 years ago. Now, as she approaches 68, Bakon, the co-owner of the exclusive Copley Place shopping mall’s only black-owned business, isn’t about to slow down.

Bakon owns Nouveau Fashion Gallery with two of her sisters, Evelyn and Wanda. As the shop’s general manager, Bakon oversees day-to-day operations. She has not only found success in her upscale boutique — she has found the fountain of youth.

“I think energy is what you possess to be ageless,” says Bacon, who looks ready for a cover shoot with Vogue or Vanity Fair. “You know what makes you ageless? It’s being open to change, embracing the unknown. I cater to my soul, and my soul wants to be fabulous. I don’t know what your soul is saying to you, but my soul says it wants to live inside a fabulous body. Energy feeds off energy. Energy keeps you youthful, and that’s what it is it’s youthfulness rather than you’re so young.”

Bakon is using that energy to take on a new chapter in her family business. In August, the sister’s celebrated the boutique’s 30th anniversary by moving from a street-level plaza area set aside for minority businesses to a larger showcase spot on the high-end mall’s second floor. There, she sells merchandise that mirrors her style.

“Our clothes, they’re not edgy, they’re forward, but affordable, they have a very elegant feel, a European flair,” Bakon says. “Nouveau is for the woman who’s not afraid to be different, who’s tired of wearing cookie-cutter styling of clothing. It’s for women who already have a wardrobe and want to add to it.”

It is a style forged from years of growth. Bakon has come a long way from the cotton fields of rural Georgia. Bakon dreamed big and fancied herself after her oldest sister, Fannie, an honor student who moved to Boston and became a school teacher. Once Fannie established herself, Bakon says, she sent home for her family.

“We came North on a Greyhound bus two at a time,” Bakon recalls. “Imagine coming from a shotgun shack to wood floors with shellac on them, beautiful floors, beautiful furniture. It was just amazing, so I worshipped her. Back then, I think Fannie was the first in our family to graduate from college and being a school teacher back in the early sixties was wonderful. So I looked up to her, I said: I want to be like Fannie — and Diana Ross.” 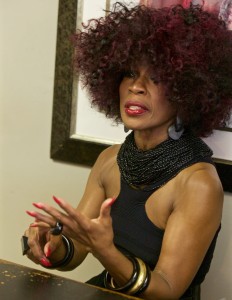 “My mantra is mind, body and spirit,” Bakon says. “A lot of people are just mind and body, but the spirit has to come into it to make it all work. My spirit became one with my mind and body when I experienced certain challenges in my life.”

Bakon wants to share those experiences with people at churches, colleges and universities as part of her “Age is Just a Number Mind, Body and Spirit Tour.” Her desire to share her life story stems from three major events in her life – domestic violence she said she experienced with her ex-husband, a near-death medical experience and the tragic, 2013 sudden death of her oldest son, Dana Kelley, an innovator in house music.

“I want to be an amazing motivational speaker,” Bakon says. “I would like to reach people at churches, colleges, universities, just anywhere where people need to know that life is wonderful and how to live – you know the Oprah thing – ‘the best life ever’ from my perception. I’ve witnessed a lot of things in my life and I think each time I’ve gone through a challenge I’ve become a better person. I’ve become stronger.”

Bakon starts every morning with her own version of yoga before massaging her body with olive and castor oil. She started regular calisthenics in her 40s and does acupuncture. For Bakon, staying beautiful and fit is a “state of mind. “You have to be aware, have self-realization, self awareness,” Bakon says. “You have to really get in tune with the body. Most people are not aware of their body. It’s a machine and I love it. Oh my God, I love it. And what you can get it to do with the mind.”
Bakon insists she has much more to do.

“Shine bright like a diamond, that’s me,” she says. “I am the happiest. I have amazing joy in my heart. I’m inspired constantly by everything. I see beauty in everything and it’s not something that’s forced. To me, it’s as natural as breathing, feeling this joy, I found it. If someone had said to me years ago that I would be this way after losing a child or going through what I went through I would have said ‘oh no’.”