Written by Howard Reich (Originally posted on the Chicago Tribune)

Even now, as we approach next month’s centennial of Billie Holiday’s birth, the singer’s story remains swathed in sensationalism.

Junkie, prostitute, rape victim, prison inmate, bloodied lover – these are the terms that dominate her biography and overshadow the single fact that matters most: her prowess as jazz singer.

It’s not difficult to understand why the tawdry facets of her narrative would be prominent in a Hollywood film such as “Lady Sings the Blues” (1972) and in the popular imagination. But that focus doesn’t do justice to her stature as a jazz singer who ennobled, expanded and deepened the art form. 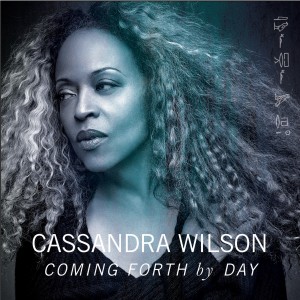 Which is partly why Cassandra Wilson – a stylistic heir to Holiday’s unflinching, stripped-to-its-essence brand of jazz singing – next month will release the album “Coming Forth by Day” (Sony Legacy). In this unconventional tribute from one singular artist to another, Wilson doesn’t mimic Holiday yet clearly evokes the master’s gifts for probing beneath the surface of a song and into its hidden meanings. And because Wilson’s honeyed alto is accompanied by lush strings and bluesy guitars – sometimes on the same track – the music sounds more like a celebration of Holiday’s artistic achievements than yet another re-examination of the tragedies of Holiday’s personal life.

“I felt it was time to set the record straight,” says Wilson, who will give Chicago a sneak preview of this music when she performs Thursday night at Thalia Hall.

“There’s so much focus on the negative – the negative surrounding her career and life. And because it is the 100th anniversary of her birth, I think it was time for her to be recognized for the great contributions she’s made to the music.
There’s so much emphasis on the drug addiction and her difficulties with her relationships,” continues Wilson. “You don’t do the same thing when you talk about Sigmund Freud. Everyone knows he was a coke addict … but we don’t talk about that. We talk about him being the father of psychoanalysis.”

Even among those who admire Holiday’s art, a prevailing and misleading narrative long has held sway. According to conventional wisdom, Holiday was at her greatest in the 1930s, when her voice was young and bright, her tempos danceable, her message warm and often ebullient.

By the late 1940s and ’50s, however, her voice was increasingly ravaged by the vicissitudes of her life, critics widely dismissing her efforts as a mere shadow of what once was.

By the time she entered the Fifties,” critic John S. Wilson wrote shortly before Holiday’s death in 1959, at age 44, “her private life was becoming increasingly difficult, her voice would no longer respond as readily as it once had and, like the aging fastball pitcher who has lost his stuff, she was depending more and more on craft and guile to put across her songs.”

To critic Wilson, and other detractors, Holiday’s late recordings suggested a performer “who is depending largely on mannerisms to carry her through tempos which are often killingly slow for a limited voice. … She seems reduced to a ragged, wavering ghost of the inspired singer she once was, straining for the remembered effects that she can no longer achieve.”

But it was the naysayers who were remembering – and yearning for – vocal effects that Holiday had outgrown. The sorrow and pain that Holiday evokes in “One for My Baby (And One More for the Road)” and the crying, long-held notes she delivers on “Body and Soul” (both from 1957) point to an artist of tremendous interpretive depth extending the expressive possibilities of what a jazz song could achieve. When Holiday dovetails softly cushioned phrases with Ben Webster’s tenor saxophone on “Willow Weep for Me” (1957) and seems to suspend time in “My Man” (1952), there’s no doubt that Holiday is using her somewhat battered instrument to attain a degree of musical and dramatic insight matched by only one singer of that era, Frank Sinatra.

Even toward the very end, in the late 1950s, Holiday’s soft-spoken utterances and somewhat tremulous vibrato bring obvious eloquence to recordings such as “There’ll Be Some Changes Made” and “All of You,” suggesting the last glowing embers of her art.

Recordings of Holiday in rehearsal reaffirm that she knew exactly what she was doing “They run me out of Chicago,” she says during one rehearsal captured in the 10-CD boxed set “The Complete Billie Holiday on Verve, 1945-1959.” “The Grand Terrace in Chicago. … Aw man, they say, ‘I don’t dig her, she’s a drag.’ They just didn’t like my singing. ‘She sounds like she’s asleep. She sounds like she’s tired.’ They didn’t dig me, and I wouldn’t change. I wouldn’t change. (Manager) Joe Glaser had me about seven, eight years and he say, ‘You got to sing pop songs, you gotta speed up the tempo.

“I gonna sing like I wanna sing. This is my way of doing it, and Mr. Glaser, I’m sorry. And when I get mad I say, ‘Look you (expletive), you sing. I gonna sing my way, you sing your way.'”

Similarly, Wilson sings in her own way in “Coming Forth by Day,” yielding fervently personalized versions of songs associated with Holiday. So perhaps it’s not surprising that Wilson, too, hears great art in Holiday’s much-maligned, late-period work.
“I’m on the same page with you on that,” says Wilson, “that it’s just more powerful. There are so many more layers of meaning in her delivery. … For me, this is Billie at her height.”

Wilson recalls that she first became aware of Holiday as a child, when she discovered in her father’s photo album a picture of Wilson’s aunt with Holiday. Wilson’s father was not a big fan of Holiday’s, “I think because there was so much negativity attached to her career,” says Wilson. “And perhaps he thought she would be a bad role model for me.”

But the family photo only piqued Wilson’s interest, leading her to begin a lifelong exploration of Holiday’s art.

“She was the very first one, I think, with this very special style of singing, where she’s conversational, and she’s very emotional, and she’s digging deep into the material – the context of the song, as well as handling what’s happening musically,” say says Wilson.

As does Wilson, who on “Coming Forth By Day” taps a Southern blues sensibility in “Crazy He Calls Me” and a disarming vulnerability in “All of Me.” Wilson’s vocals float over translucent orchestral accompaniment in “What a Little Moonlight Can Do”; her amber tone is bathed in lush strings in “You Go to My Head.” String arrangements by Van Dyke Parks, guitar laments from T-Bone Burnett and from Nick Zinner of the Yeah Yeah Yeahs, plus contributions from the rhythm section of the Bad Seeds and others might seem like a clash of styles on paper but come together surprisingly well under producer Nick Launay (known for his work with Nick Cave).

Most searing is Wilson’s version of “Strange Fruit,” which she sang introspectively on her “New Moon Daughter” album (1996) but here emerges as an epic plea for justice. Perhaps in the era of Trayvon Martin, Eric Garner and other slain black men, Holiday’s dirge on lynching speaks to our times.

“That was exactly the thought,” says Wilson. “It’s not the same process that’s used to murder young men, but the feeling behind it is the same.”

And Wilson’s performance of this work – like the rest of her Holiday homage – is not easily forgotten.

Howard Reich covers the Arts and Entertainment for the Chicago Tribune. Follow Howard on Twitter at @howardreich.
Image Source