What a time to be alive. After 55 years, Madeleine L’Engle’s A Wrinkle in Time, largely written off as impossible to adapt, and Roxanne Roxanne, the biopic on real life trailblazing MC Roxanne Shante were released on March 9th and 23rd respectively. Black girls and the people who love them got not one, but two powerful coming of age movies in the same month. One’s a big budget fantasy film of fictional characters, the other an independent Sundance darling based on a living person and rooted in the grit of Queens at the dawn of hip hop. One is powered by Disney and Oprah, the other by Skateboard P and Netflix. These films couldn’t be more different, but the core messages of each are strikingly similar.

Meg Murry is an awkward, introverted tween girl who embarks on a search for her father—and in so doing, finds the best of herself, embracing her intelligence, her uniqueness and her refusal to give up reuniting her family. Everything placed before her requires faith that has been tested every day of the four years her father remained missing. How does a girl who can’t even make friends in school bend time and space to her will? 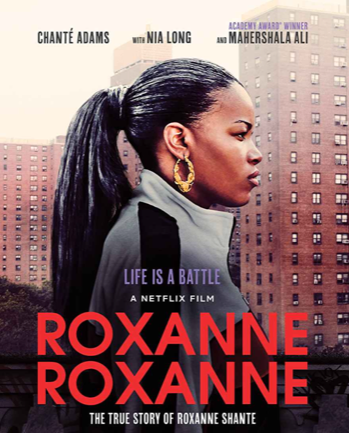 For Shante, the belief in self is firmly planted, but it’s the treachery of her father’s absence coupled with the betrayal and abandonment of her mother’s boyfriend that sow a minefield for Shante to navigate. Armed with battle rhymes, she still catches the shrapnel of surviving an attempted rape and being robbed of her earnings on sold out tours. She’s able to bounce back from both…until she’s ensnared by a drug dealing man twice her age and three times her size, who tells her “I hit you because I love you”. Her knowledge of her own power on the mic and the love she’s known from her mother and sisters make her question this—but by the time she tries to leave, she has been brutally beaten, has given birth to a baby boy, and has lost her drive to rhyme. How does a girl with no home and several cracked ribs rescue her baby from a coked-up nightmare?

For both Meg and Shante, the answers reveal themselves as the light from the fires that burn in their hearts and the freestyled creativity of their razor sharp minds. When all seems lost, Meg’s declaration that she deserves love and Shante’s declaration that she deserves to be free are what get them to the other side. Neither of these girls make it based on their looks. Material things don’t compare to being held by their missing loved one. For the sheros imparting these lessons to be Black girls is nothing short of a revelation at a time when Black girls fight daily to be seen, heard, recognized and honored, amid a tsunami of sexual violence, microagressions, Columbusing of their bodies and muzzling of their voices. And let’s be clear: the general market needs to see Black girls this way too. The time to cleanse their palates of damaging stereotypes is long overdue.

Given the magnitude of the takeaway for children of all genders and backgrounds about their personal power and value being in their control, and not controlled by one’s environment, I really can’t hold space for the shallow criticisms being levied against these monumental projects. As many times as you’ve suspended disbelief for a fantasy, now suddenly the costumes and makeup in AWIT are distracting? As many times as biopics have rewritten history, y’all got an issue with the pacing and the ending of Roxanne Roxanne? These are actual “critiques” I’ve seen in social media feeds. The target demo of AWIT are children—and they are loving this film. Biracial families are seeing themselves centered as loving without the constraints of racial tension. This is huge for a tentpole film. The target demo of Roxanne Roxanne—lovers of hip hop and Black women—are also loving that film for its raw truth.

Which brings me to Hollywood overall, which cannot be let off the hook here. Both films also import great messages for the industry to consider: that this is not a wave. Films made by creatives of color and women that are buzzworthy and perform well at the box office are the new normal. So keep greenlighting the unusual stories, the ones that are universal in their specificity and told from diverse perspectives. AWIT was the third tentpole released after Black Panther, and it’s still made $90M worldwide as of this writing—without a Marvel character or an A-list lead. Annihilation starring Academy Award® winner Natalie Portman was the first, and to date has only made $31M. Roxanne Roxanne has only been streaming for a few days, but the social chatter and reviews agree: the film is authentic to the period and its subject, while delivering standout performances from Nia Long and Chante Adams. I experienced it on the big screen, and Roxanne Roxanne had audiences cheering and crying much in the way Black Panther did; people saw themselves as powerful, intelligent and relatable in their motivations, even when deeply flawed.

As I remember pining for movies that had girls like me as the central character in the ‘80s (hint: John Hughes never made any, as entertaining as his films were), I am reveling in having two Black girl geniuses rock the theaters and small screen at the same damn time. I am giving directors DuVernay and Larnell their hard earned props, and tipping my Kangol to all their producers, Adam Borba, Douglas C. Merrifield, Catherine Hand and Jim Whitaker on A Wrinkle In Time and Forest Whitaker, Pharrell Williams, Mimi Valdes and Nina Yang Bongiovi on Roxanne Roxanne.

Give yourself permission to focus on the big picture of two more big, feel-great cinematic moments of the season.