Ernestine Shepherd is the oldest competitive female bodybuilder in the world, as declared by the Guinness Book of World Records; as of 2014 she is 77 years old. In addition, she leads exercise classes for seniors and works as a personal trainer. 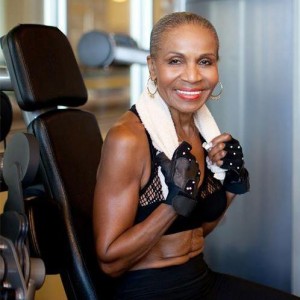 Ms. Shepherd wakes up at 3 a.m. every day to meditate, then hits the trails in a local park to run 10 miles before lunch. She eats only plain brown rice, bland chicken breast and vegetables, washed down with a glass of raw egg whites, three times a day. She has made it publicly known she has no ‘desire’ for sweets.

But she wasn’t always so fit. Ms. Shepherd told the Washington Post she was a ‘couch potato’ until she was 56 years old, when she and her older sister, Mildred, discovered their bodies had started going soft.

The sisters, who grew up very close in Baltimore as the children of a carpenter and schoolteacher, started working out together at a local center. They liked the results, and started pushing themselves, eventually entering some bodybuilding contests.

After Mildred died suddenly of an aneurysm, Ms. Shepherd was devastated. Her grief started spiraling out of control, until she remembered a promise and a ‘pinkie swear’ she had made her older sister.

Over the past 18 years, Ms. Shepherd has run nine marathons and won two bodybuilding contests. She does it in part to remember her late sister, Mildred, who died suddenly of an aneurysm

Age is nothing but a number. You can get fit at any age. I feel so much better now in my 70s than I did in my 40s.